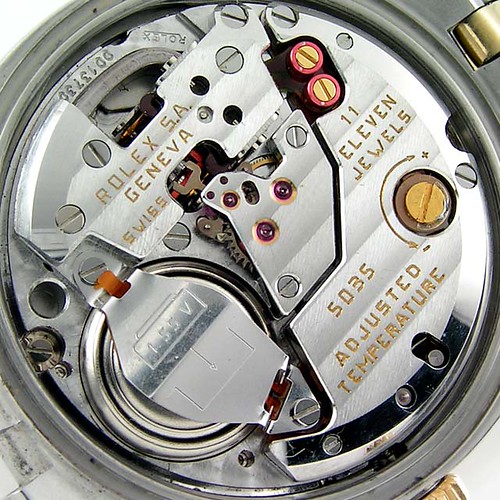 How does a quartz movement work?

First introduced in 1969 by Japanese manufacturer Seiko, quartz movements are much simpler by comparison. They were made with the goal to challenge traditional perspectives on watch production.Up until this point, there had only ever been mechanical watches, which were difficult for the layman to afford. Cheaper quartz movements changed the watch industry forever.Quartz movements are powered by a battery. They require no winding whatsoever.Batteries send electric signals to a quartz crystal, causing it to vibrate 768 times per second. These vibrations are then measured through a circuit and converted into singular electrical pulses – one pulse per second.The result is a watch that is far more accurate than any mechanical watch thus far.

No doubt that there are high-quality quartz resonators, which offer excellent accuracy, but the reality is that nothing beats a mechanical movement. Longines hand-wound or self-winding mechanical movement are born of ingenious skills and the finest of materials.All the components are made of stainless steel, other high performing alloys,or gold. But even more, is that the accuracy of the mechanical movement stop-notch.Mechanical movement guarantees a long and useful life if the owner uses it carefully and services it regularly. Despite having to face several harsh conditions of temperature variation, magnetic, and gravitational field distortions, it still has the ability to maintain a great deal of accuracy.Its automatic self-winding movement uses the body’s movement to maintain accuracy, but if anything goes wrong, you may also adjust the time using the crown.

While the history of the quartz clock dates back 80 years, quartz wristwatches didn’t hit the market until the late 1960s. The rise of the quartz watch had a major impact on the watch industry –particularly the Swiss watch industry – thanks to its affordability and the fact that it’s more accurate than “mechanical” automatic watches.So, what is a quartz watch and quartz movement, exactly?The main point to consider is that quartz watches get their power from battery. The electrical current from the battery powers the quartz crystal within the movement while causing it to vibrate. In turn, the vibrations cause an oscillating movement that drives the motor, then the hands on the face of the watch. A quick note: When we refer to a watch’s movement, we’re talking about the mechanism that powers the clock.Quartz watches tend to be of simpler construction than automatic/mechanical watches and, again, get their power from a battery.The typical battery life of a quartz watch is 3 to 5 years. Battery life canary depending on any additional features, such as a compass or stopwatch.Besides battery replacement, very little maintenance is needed to keep a quartz watch in full function.Another important point about quartz watches is that they’re extremely accurate, even to within a few seconds each year.While automatic and mechanical watches depend on the force of gravity, which varies (albeit very slightly) from location to location, quartz watches have gears that keep track of the seconds, minutes, and hours – gears regulated by the tiny quartz crystal within them.That said, gravity doesn’t have an impact on the inner workings of a quartz watch, so you can be 99% sure it’s displaying the accurate time, no matter your location.The pulses of the quartz crystal power an LCD or drive a small electric motor that spins the clock’s hands, like in more traditional timekeeping.While quartz watches don’t have the street cred of most automatic and mechanical luxury watches, they’re lightweight and typically have a slimmer design. They also cost less, and that’s part of their street cred rating, but many-classic watchmaking companies manufacture fashionable quartz designs.

Why do mechanical movements sweep?

The gear train moves the second hand every time the balance swings. This happens 6-8 times per second. To the eye, this makes for a continual gliding motion or ‘sweep’ of the seconds hand on a mechanical watch.Don’t be fooled – it’s not a perfectly smooth motion, it just ticks faster in smaller increments. Some mechanical men’s watches tick audibly, but most don’t.

The mechanical watch movement is the oldest mechanism used in watchmaking. Ithas been around since the 17th century way back when timepieces had its revolutionary breakthrough. Invicta’s selection of watches with this movement is celebrated for their exceptional “old world” craftsmanship, reflecting mastery, expertise, and top of the line quality. What makes these timepieces work is a spring-driven mechanism driving a series of oscillating gears that consistently moves backhand fort.The thing about manual movement is that it requires manual winding for the mechanism to run smoothly, which means that mechanical Invicta watches need to be manually winded to ensure a smooth operation.

Quartz watches vs. automatic watches & all the rest

We talked earlier about a watch’s movement when discussing things you should consider before buying a luxury watch, and it basically comes down to this:quartz vs. automatic movement watches.There are definite differences, so let’s dig a little deeper and look into the different types.

Usually, our buying guides offer an idea of prices for entry-level, mid-range,and high-end versions of a particular product. That doesn’t really apply to Bulova because all are premium watches.That said, your Bulova doesn’t have to break the bank. Stylish dress watches with a display that features classic hour, minute, and second hands plus the date start at around $150. Many  models can be found starting at $250.From there on, it’s largely a question of how complex the mechanism is and what components are used. Dive watches built to withstand high water pressure are in the $800 range, and diamond-encrusted dress watches can reach $1,500 or more. The most expensive Bulova watch ever made was the Joseph Bulova Collection First Edition 24-Karat Gold Timepiece, released in 2015. Titanium was also used in its construction. Each one cost $42,000 and only 32 were made.> While almost all Bulova watches are marked with the company name and/or> tuning fork logo, the Accutron range simply bears its own name. It’s also> possible to find Bulova movements in cases from other watchmakers.

4 Are the Rolex watches handmade