This rare example that sold for $2.26 million is a Patek Philippe made in1944, in stainless steel. It sold for the auction price listed above atChristies. The sale took place in November of 2007 and the purchase was madeby a private museum in Switzerland. This example, as all Patek Philippe modelsare only produced in stainless steel material in limited numbers. It isdifficult to locate a perpetual calendar wrist watch in stainless steelmaterial today. There are only six known examples which are currently on themarket. Of these, are this example, the reference 1591, now in a Swiss museum,four perpetual calendar with chronograph wrist watches reference 1518, and aperpetual calendar featuring subsidiary seconds, reference 1526. Each of theserare pieces are representations of the value involved with the collection ofrare time pieces. There is not only an aesthetic and prestige factor, many ofthese fine collectibles have a great historical as well as monetary value.Patek Philippe is among the most highly collected watch brands, and certainexamples are among the most sought after in the world

The Patek Philippe Reference 1527 was crafted in 1943. It is one of thehighest dollar watches designed by the famous watchmaker. In comparison withsome of the more ornate examples, it may appear more on the ordinary side, butit has a great value to collectors who are willing to pay the price tag of$5.7 million for ownership. Although not as fanciful as the Hublot Big Bang,the Patek Philippe Reference 1527 contains more than 20 different preciousstones. In addition, it is made from the very expensive material of 20 karatrose gold. This is among the most rare Patek Philippe watches in existence,for two reasons. The first, being that it is the only one of its kind that hasever been made. Secondly, the watch is believed to have served as theinspiration for sever Patek Philippe models which came afterwards.

Once again, Patek Philippe tops the list with the Henry GravesSupercomplication pocket watch. The watchmakers took their time in the designand crafting of this watch with an estimated three years for the design, andthe creation process taking an additional five years. This piece is circa1930s, and for the era in which it was created, it was one of the mostadvanced and complicated time pieces of its kind. The word was in awe when thepocket watch sold for $11 million in 1999, but the collector’s piece wouldonly increase in value with the passage of time. It set the record for beingthe most expensive watch ever sold at the time of its sale. When it was yetsold again, the watch had increased to a value of $24 million, which places itfirmly in the position of the sixth most expensive watch ever sold.

Price: $1,091,869This is the first double-faced wristwatch from Patek Philippe and features thenocturnal sky on its reverse side with the motion of the stars, the orbit ofthe moon and its phases and a display of sidereal time. It also features aperpetual calendar, a tourbillon and a minute repeater.

Price: $1,812,700The Tourbillon Diamants from Blancpain features 480 embedded diamonds totaling58 carats on the dial, bezel, case, lugs and bracelet. It is self winding andit has an exceptionally long power reserve of seven days. This luxurioustimepiece is water resistant to a depth of 100 meters.

This Patek Philippe was a labor of love and an investment of time. The designand assembly took place in the year 1930, but the famed watch maker did notreveal it to the world until nine years later in 1939. This particular piecewas a classic treasure with perfect execution, and a stunning aesthetic. It’shigh value is due to the brand, of course, and the rarity of the piece. Whilethere is not a lot of information available on the history of this watch, wedo known that it is a one of a kind and there has never been another of itskind made. After its initial sale in 1939, the watch wan’t seen again until itresurfaced. In 2002, it was sold for $4 million.

Patek Philippe has been designing handmade Swiss watches since 1839.It’s Sky Moon Tourbillon stands out as a truly complex timepiece — andbecause of its $1.3 million price tag. It has a chronograph with the day ofthe week, month and moon phase. It’s also a piece of art, with a polished caseand black leather strap.” 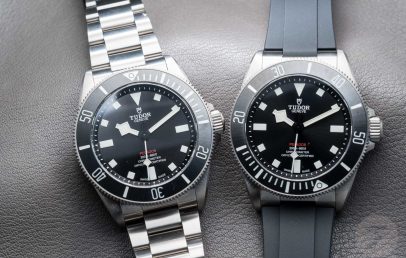